In which I argue that The Ocean is very small

...and so is the breathable atmosphere...

NOTE: I started researching this page in August 2020, and did a partial first draft in Septemeber 2020, so the choice of the National Mall in Washington DC for dimensional comparisons was entirely unrelated to the insurrection of January 6th, 2021.

Note: This page is still a work in progress, but I imposed a deadlin on myself to get the site updates in place before the Economist World Ocean Summit on March 1st-5th. No doubt there will be polishing, rewriting, and integration of the 2 sections in the days and weeks ahead.

As eartbound animals, we have a distorted concept of the vertical scale of things. We imagine that the sky is enormous, but think nothing of the distance we easily cover in cars. The troposphere, which is the only layer of the atmosphere that we can breathe (at least a large slice of it), also contains 80% of the atmosphere's mass, nearly all the water vapor, and nearly all of the weather, in point of fact ranges only from 6km deep at the poles and to most 18 km deep in the tropics. So, if it were possible to drive a car straight up at 35 miles per hour (56 kilometers per hour), the driver would be out of the troposphere in as little as 6.4 and at most 19.3 minutes. Most of us would perceive ourselves to be very high up if we were in the top of a 100 foot (30.5 meter) tree, but most of us can walk 100 feet in an extremely short time, and don't see it as at all far.

Getting to the hydrosphere, the photic zone, where light penetrates the ocean and photosynthesis can occur, is 200m deep. And estimates vary, but let us say that the ocean produces 2/3rds of the Earths O2, molecular oxygen, supply. So a vertical distance that Usain Bolt could cover in 19.16 seconds produces 2/3rds of our oxygen. The average depth of the World Ocean is 3.682km (2.288 mi), a distance that can be covered in less than 4 minutes at 35 mph. And 99.8% of the area of the ocean is 6km (3.73mi) or less deep, a 6.4 minute traverse at 35mph. The 33 Hadal Zone trenches, of which the Marianas Trench is the deepest at 10.984km (6.825mi), account for only 0.2% of the area.

If we make the assumption that the biosphere extends as far as 2km below the Marianas trench floor level, and to the height of the troposphere (see Aeroplankton), then the entire height or thickness of the biosphere on the sphere of the Earth comes to about 31km (19.25mi), which could be traversed in a mere 33 minutes 35 mph.

The Earth's non-gaseous diameter is about 12,742 km or 7,918 mi. So, on a basketball sized Earth (9.5in / 24.13cm), the totality of the biosphere could fit in a spherical shell a mere 561.5 microns (0.5615 millimeters) thick. For comparison, a human hair is between 17-181 microns across, and a sheet of copy paper is about 100 microns thick. We tend to think of space and astronauts as very high indeed, but in low earth orbit around 408-410km up, the International Space Station is only 7.76 millimeters or 0.306 inches above our basketball model-Earth

The perimeter of the National Mall as calculated by me in Google Maps (6.84mi):

It is also less than the perimeter of the shopping mall just past the highway from here in Louisville, KY (1.15mi / 1.85km): 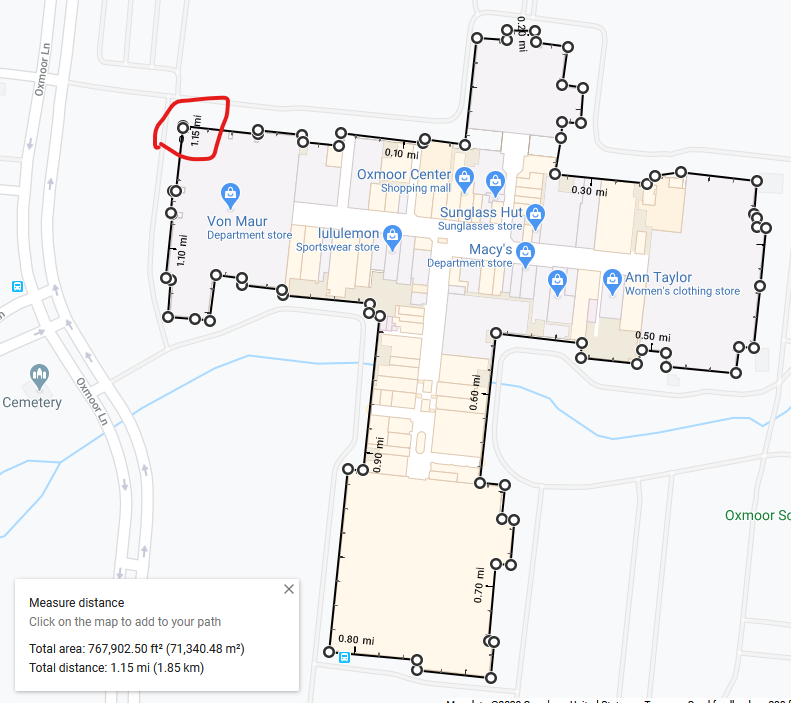